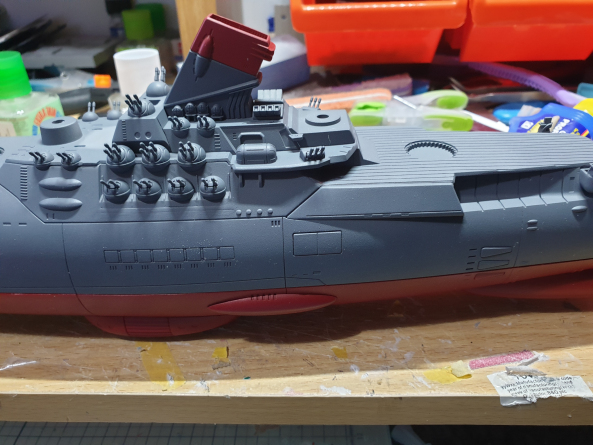 Apologies for the slow progress on the Space Yamato but have got a lot done recently. Now that it is ready for painting this is when I have fitted all the small guns to the hull so they would not get damaged if I did something stupid in-between working on her. Tweezers are very useful at this stage and I found that ultra thin glue gave a better look in case of overspill.

As most of the upper hull had already been primed I just needed to give the newer parts a once over in grey primer and then some light coats of the main grey colour. The colour I chose was the tyoop . At the same time I painted the superstructures and the small fins & vanes to mount right at the end.

The way the kit has been designed allows the lower hull to be made as a separate stage & be glued on later, so I built this up with the side pods then filled and sanded the joins to remove the seam lines before priming & painting in the red colour. The lower control section was built and painted then put to one side to fit when the stand has been done. The painted funnel was also fitted to the upper hull.

Sadly due to an issue with my phone I have lost all the pictures of these stages so can’t show how this looks before I fitted it to the upper hull.

While the hull dries I started on the small fighters that will sit on the stand. Going to have to really careful when painting these up, but the easy stage was to prime 4 of them with grey primer. Two of the fighters are yellow/black so these were primed in white to start with, then 2 coats of Vallejo “Premium Color” yellow gave me a very good base to start with. I like this range as the pigment is very deep in colour unlike some that even with a few coats still look opaque over the primer.

Time for deep breaths and a steady hand while I mark out the details on these 2 “Black Tiger” fighters. I’ll fill in the colour later as need to be calm before doing it, so by using a 0.05mm black engineers pen it allowed me to get just into the recesses of the panels. 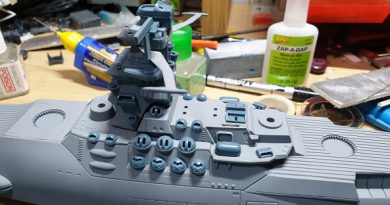 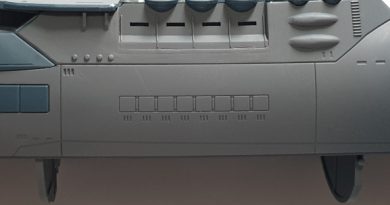